Why is the leader of the L&L Hawaiian Barbecue empire, Elisia Flores, smiling so much these days? It probably has to do with a couple of momentous and grin-worthy occasions that just occurred or are right around the corner.

Coming up is the much-anticipated L&L convention, scheduled for April 15-16 at Royal Hawaiian Resort and Sheraton Waikīkī. The event, which will commemorate the 70th anniversary of the popular restaurant chain, is expected to draw more than 200 L&L Hawaiian Barbecue franchisees from more than 10 states and Japan.

“I’m super excited about the future,” says Flores, who serves as CEO and vice chair of the company. “We’re at 211 stores right now, so I’m hoping to double our store count in the next 10 years, and really, really celebrate Hawaiian barbecue across the nation.” 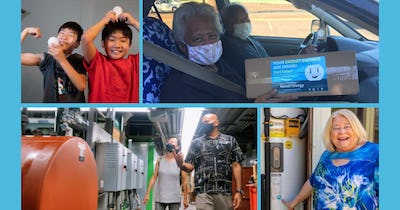