Innovation is no stranger to Cohort I Fellow Forest Frizzell. As the co-founder and CEO of Shifted Energy, he and his team have iterated and improved their technology and software, developing what they call “the best distributed energy resources software platform in the world.”

Long before his innovations with Shifted Energy, Forest has spent a lifetime innovating within his career, and himself.

Growing up in a small rural town in Oregon, a lower-income area with only about 250 people, came with its challenges. His family didn’t have a TV until he was in the 8thgrade, and his home had a “party-line” phone line that was shared with three other families. Humble beginnings for someone who would eventually thrive in a career in technology. However, when it came to his education, Forest wasn’t exactly on the best path.

“I barely graduated from high school,” he remembers. “I was in trouble a lot. I wasn’t going to go to college. I didn’t really have much of a plan.”

After graduation, he realized that he needed to make some changes. It was around this time that he would make a friend from Hawai‘i in Oregon—a native Hawaiian young man named Ho‘ala Greevy—that would forever transform his life.

“Through our friendship, I got to know his family,” he said. So in 1996, Forest followed Ho‘ala to Hawai‘i, “to kinda just check it out.” Forest ended up not going back to Oregon.

“[The Mansfield] family ‘hanaied’ me and so I lived with them for many years,” he says. “I would not be sitting here today if it wasn’t for this family—that wasn’t my blood—that took an interest in me, took me in, and spent a lot of time with me. Every single day I think about that. I have a really deep-rooted connection and kuleana to this place because Hawai‘i changed my life.”

The safe space that his hanai family provided in Hawai‘i helped him flourish. “It allowed me to start the process to understand who I was and what my potential could be.”

"I would not be sitting here today if it wasn’t for this family—that wasn’t my blood—that took an interest in me, took me in, and spent a lot of time with me. Every single day I think about that. I have a really deep-rooted connection and kuleana to this place because Hawai‘i changed my life."

Forest continued to work while going to school at the University of Hawai‘i. He held multiple jobs: waiting tables, doing production assistant work, and operating cameras at PBS.

“I was always working,” he says. “I would go weeks—and sometimes months—without a day off and still go to school. But I knew that it was what I had to do to pay for it.”

After he received his degree, he got his first tech job for a semiconductor startup in Silicon Valley. “I was probably the least qualified person at that lab, because I wasn’t a computer science major,” he says. What he did have was hands-on experience as an intern with a local network provider company where he learned how to work on computers and networks.

“Every single day I would go to this networking hub in Mō‘ili‘ili,” he says. “It was that work that I did for an entire year that allowed me to get my first job.” Decisions like these are what helped him “bolt-on success” along his journey.

His work would eventually bring him back home to Hawai‘i where he would hold various IT-related jobs over the next few years. “I wanted that learning and impact to be here,” he says. As his career progressed, he also wanted to find ways he could give back to Hawai‘i.

“I met with my hanai Mom (Ha‘aheo Mansfield) and said ‘hey, I want to figure out how to be more impactful and give back.’” She introduced him to a colleague of hers, Olin Lagon, a serial tech entrepreneur who at the time was a board member where she worked.

Forest fondly remembers his first meeting with Olin over Thai food, where they talked story and became friends. “It was really inspiring to me,” he says. “I took that and I joined the Boys and Girls Club board, and slowly started to add more and more community-focused work.”

“It was a scary thing. I’d never been a CEO before, I’d never pitched to venture capitalists before. Everything was totally new.”

Another "Shift" in Energy

Following another few years working in various tech-related positions in county and state government, Forest admits he “got pretty burnt out.”

“I went on a month-long huaka‘i (voyage) to Aotearoa (New Zealand),” he says. “I went from Auckland down to Wanaka and back up again.” It was during this amazing experience he decided that whatever he did next would be focused on energy and climate change.

He worked for Hawai‘i Gas for a couple of years where he gained an understanding of the distribution of energy. “I’m really grateful for my time there,” he says. He adds that without that experience, he wouldn’t have been prepared for what would come next.

“Olin had been tinkering with this idea,” Forest said. “He wanted to start a company that was laser-focused on climate solutions and climate tech.” So in 2017, Forest joined his friend as co-founder and CEO of Shifted Energy.

“I think climate change is the most critical issue of our lifetime, and we need to scale solutions and it needs to be something that is accessible to all.”

“It was a scary thing,” he remembers. “I’d never been a CEO before, I’d never pitched to venture capitalists before. Everything was totally new.”

The pair had a few goals as they started off. They wanted to build a platform they could scale across the world, and they also wanted to prove that solutions to help address Hawai‘i’s energy needs could come from local companies. They also identified a need for low-moderate income families and those who are renters or live in multi-family buildings to participate in green energy programs.

“If we can artificially remove that demand and put it [in a water heater], we can burn less fossil fuel during that peak and take more advantage of times when we are producing renewable energy,” he explained. With the use of advanced machine learning, their software also learns usage patterns, making automatic adjustments that match a family’s unique needs.

There’s another direct connection to their mission of providing energy solutions to low-moderate income families. “Electric water heaters are the cheapest form of water heating,” he says. “So you see them used pretty prevalently in low-income communities and rental units. When we enroll those families into the program, they’ll get bill credits every month.” Then, they work with partners like Hawai‘i Energy to engage with and educate those families and introduce other ways to reduce energy consumption, further reducing their electric bill.

Forest says it’s those connections with other organizations within the energy ecosystem in Hawai‘i that have been pivotal to Shifted Energy’s success. “We’ve gone through Elemental Excelerator twice, and have always emerged a much stronger, more resilient organization,” he says. They also partner with Hawaiian Electric, running at least a half-dozen pilot programs with them. “To have a sandbox and support [in Hawai‘i] has been very helpful,” he adds.

And in the last two years, their work with Hawai‘i Energy has led to enrolling more than a thousand low-moderate income families into their Clean Energy Water Heater Program, at no cost to those families.

“I think climate change is the most critical issue of our lifetime,” he says, “and we need to scale solutions and it needs to be something that is accessible to all.” Today, Shifted Energy’s world-class technology is in nine US states and four countries. And they have a couple of new “impactful” projects in the works that they hope to announce soon.

“It will be another chance for us to show that [we] are a local Hawaiian start-up that is competing against these big players that are coming into the Hawai‘i market,” he says. “We want to help inspire other locals to start their own energy companies.”

“There’s a lot of pride in knowing that we’ve done it here in our own backyard.”

Learn more about Shifted Energy and their Clean Energy Water Heater Program at the links below. 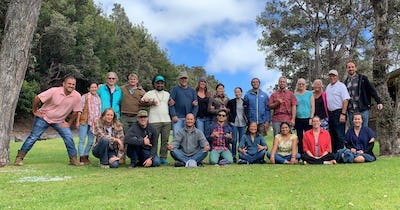