Learn about the projects of Fellows and their impacts in Hawai‘i.

Increasingly, law school graduates find themselves exercising leadership outside law firms and courtrooms. The University of Hawai‘i at Mānoa William S. Richardson School of Law has several generations of graduates who have founded businesses, become nonprofit executives, been elected to political office—exercising leadership in multiple roles across society. While legal education has traditionally focused on the role of lawyers within the legal arena, knowing how to lead and understanding different ways is a different skillset.

In this unique seminar, Dean Camille Nelson will be joined by a group of Omidyar Fellows and UH Law graduates Josh Stanbro, Cat Awakuni Colón, and Brent Kakesako, in addition to Rachael Wong and Noelani Kalipi who are not UH Law School alumni. The group has worked to create a curriculum largely based on the "I, We, It" curriculum used by the Hawai‘i Leadership Forum (HLF) to provide a mini-course focused on core skills and techniques that have proven helpful for leaders to guide holistic approaches to challenges and opportunities.  The course focuses heavily on practical application, giving students the time and space to try out techniques so that the can be deployed immediately. Similar to the "Conversation with a Leader" series hosted by HLF, the course includes several “Leaders in Residence” who will host candid conversations and case studies, including:

The Island Leadership Lab Seminar will feature small group interactions that build leadership skills and share tools that will be used by students during their law school studies, upon graduation, and across their entire careers. The curriculum for the Lab is based on the model created by HLF: the Omidyar Fellows program. Sheila Heen and Dave Viotti are guest instructors during six week course. 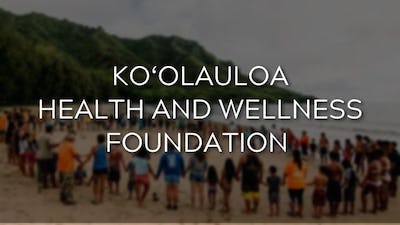 Their vision is a community where health, wellness, and happiness thrive in every home.